Come and discover spectacular tracks during a stay in unspoiled surroundings. You can ride round 20 different circuits in the vicinity, each clearly signposted according to the level of difficulty, ranging from 5 to 25 miles in length and hills with an aggregate of climbs totalling more than 2,000m (9,000ft)! 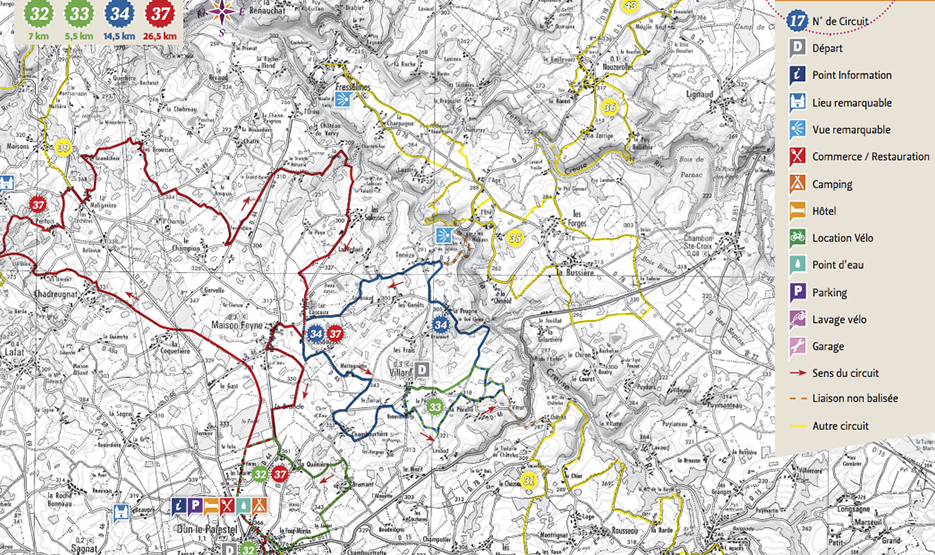 Circuit 26 No great difficulty although the hill south of Teillablon will prove a good test of your fitness! Take care on the tricky downhill section between Les Ribières and Le Peyrat

Circuit 27 : A circuit where for most of the way you can get up speed. When you get to the Chabannes woods it’s worth a climb up to the summit, but take careful on the descent between Les Ribières and Le Peyrat, especially where your route twice crosses the D5 road.

Circuit 28 : Starting from the village centre, this route will get your legs turning before tackling the Chabannes wood section, where the climb, although not tricky, is physically testing. The return journey is enjoyable though careful on the wet section just after Le Teilloux.

Circuit 29 : This is both technically and physically difficult, whether climbing or descending. After Puyléger, there is a very wet section (it’s actually a stream bed) requiring a certain agility. Take your time on the climb after le Petit Montpion up to the top of the Montpion wood. It’s worth a stop to see the picturesque chapel of Mas Saint-Jean.

Circuit 30 : A combination of circuits 28 et 29, picturesque but difficult for non-experts..

Circuit 31 : Leaving Saint Sulpice le Dunois, this circuit runs pleasantly for 15 miles along the banks and glens of the Creuse. This course will interest the fitter rider – and don’t forget to take your camera. 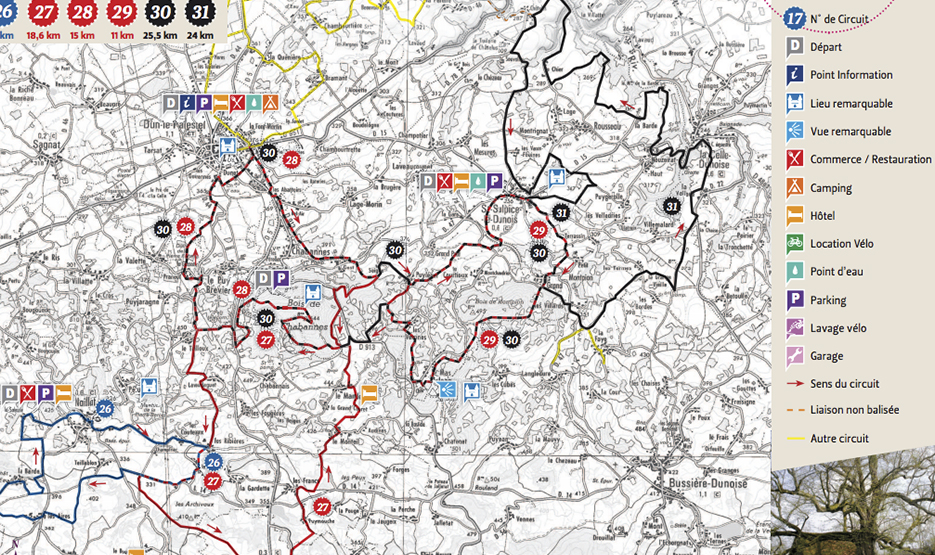 Circuit 32 : A short ride ideal for a family outing. The way back takes in a delightful stretch along a disused railway track. Take care crossing the D44 road.

Circuit 33 : An easy circuit but which can cause some difficulty in wet weather when large puddles form near La Pérelle. A pretty ride suitable for all.

Circuit 34 : This itinerary borrows part of circuit 33 and then turns north to the River Creuse. Treat the downhill section just before Le Gué Cornu with caution. If you stop at the river bank, watch out for roaming dogs..

Circuit 37 : This is a mixture of fast stretches and very technical sections which have been specially laid with mountain bikes in mind. The early part along a disused railway track (complete with crossing-keepers’ huts) will get your legs turning. A word of warning: this is a long circuit of nearly 19 miles so monitor your effort. 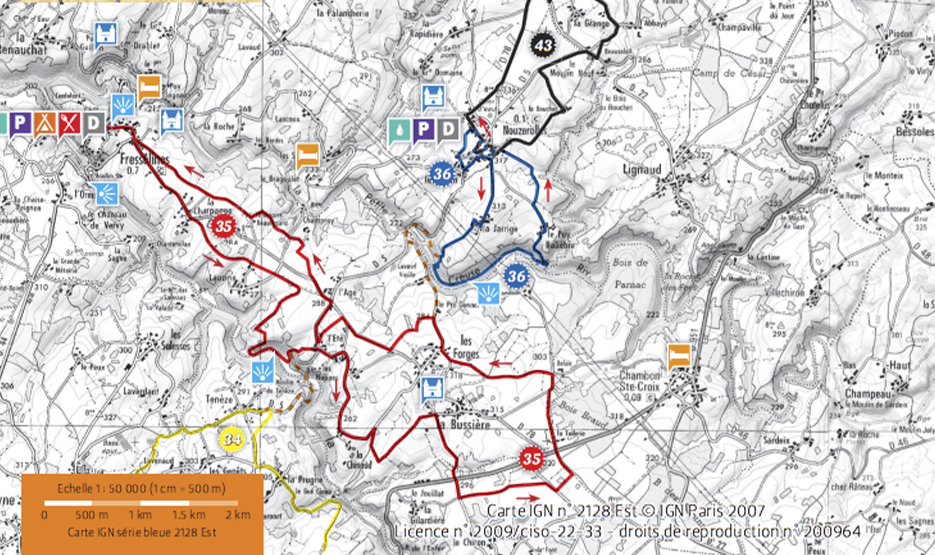 Circuit 35 : Starting from Fresselines, this is a lovely run of 12½ miles with superbe views and forays into hidden coombs along the River Creuse. Eastwards you’ll catch a glimpse of the remains of an old tile factory, a picturesque building but unfortunately on private property.

Circuit 36 : One of the prettiest rides of the western Creuse skirting the village of Nouzerolles. the chapel at the beginning of the circuit is worth a look, then you arrive at the River Petite Creuse – magic! – and then, taking your time, follow the river upstream as far as Puy Balièbre about ½ mile later. Watch out for some very wet patches.

Circuit 43 : This is the longest of the mountain-bike trails in this quarter, so in order to get the maximum pleasure from your ride don’t forget to eat and drink regularly. Comprising mainly good, off-road tracks this course enables you to keep up a good average speed. Warning: your route crosses the busy D36. . 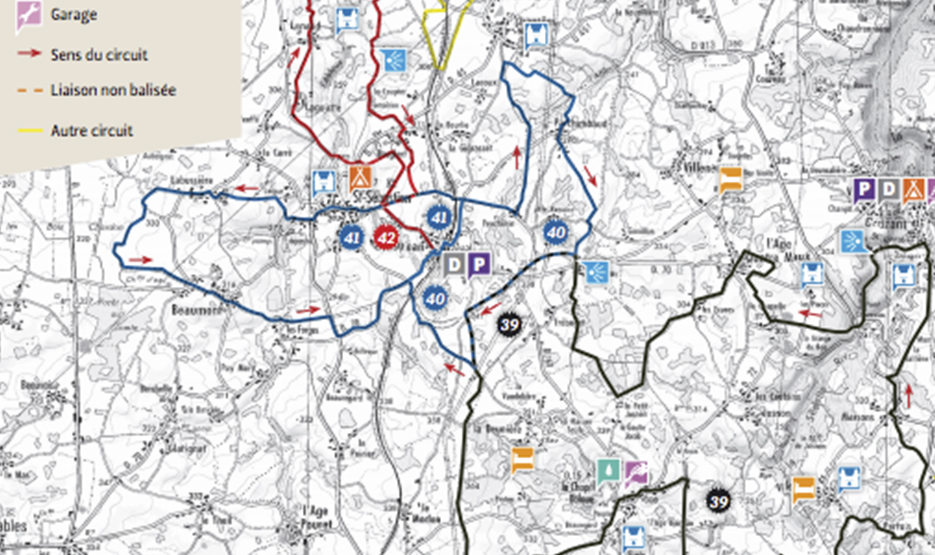 Circuit 38 : Starting from Bourg de Lafat, take the route towards Colondannes, then after having crossed the D69 road at La Chapelle Balouë, proceed towards Les Genêts, then immediately take the footpath to the right. After passing through the village of Les Coutures you go over the spectacular Sibillo viaduct. At the entry of the village of La Jaussée, take the narrow footpath to the left, then immediately left again after the Moulin du Pin bridge.

Circuit 39 : This route offers considerable variety, taking you along sections of old railway tracks (la Chapelle Baloue, Vaussujean) and tricky single-file paths (le Perthuis, Mazérolles). Then you’ll have the rare treat to come across the ‘valley of the painters’ (Crozant, the Charraud bridge. Warning, in winter there is a muddy section between the villages of Les Maisons and Crozant. Take a break to stroll around the Crozant and its surroundings – the views are superb.

Circuit 40 : Leaving the station, your first test is a goodly climb to Peuchenin followed by a fun descent, so you are straightaway into the thick of things. At the village of Marainan, there is a extended section along a disused railway line (as for Circuit 39) which is both pleasant and relaxing. .

Circuit 41 : You can start this circuit either from the station or from the centre of Saint Sébastien. centre. It’s easier than Circuit 40, though in wet weather there are muddy sections in the western part. If you’re fit, why not combine Circuits n° 40 et 41 ?!

Circuit 42 : This circuit is not too demanding. Leaving Saint Sébastien, it climbs towards the north. Between.Labetoulle and Peugueffier, the track has been specially done up for a pleasant ride alongside the Abloux stream and on the return journey you will pass through wooded countryside. 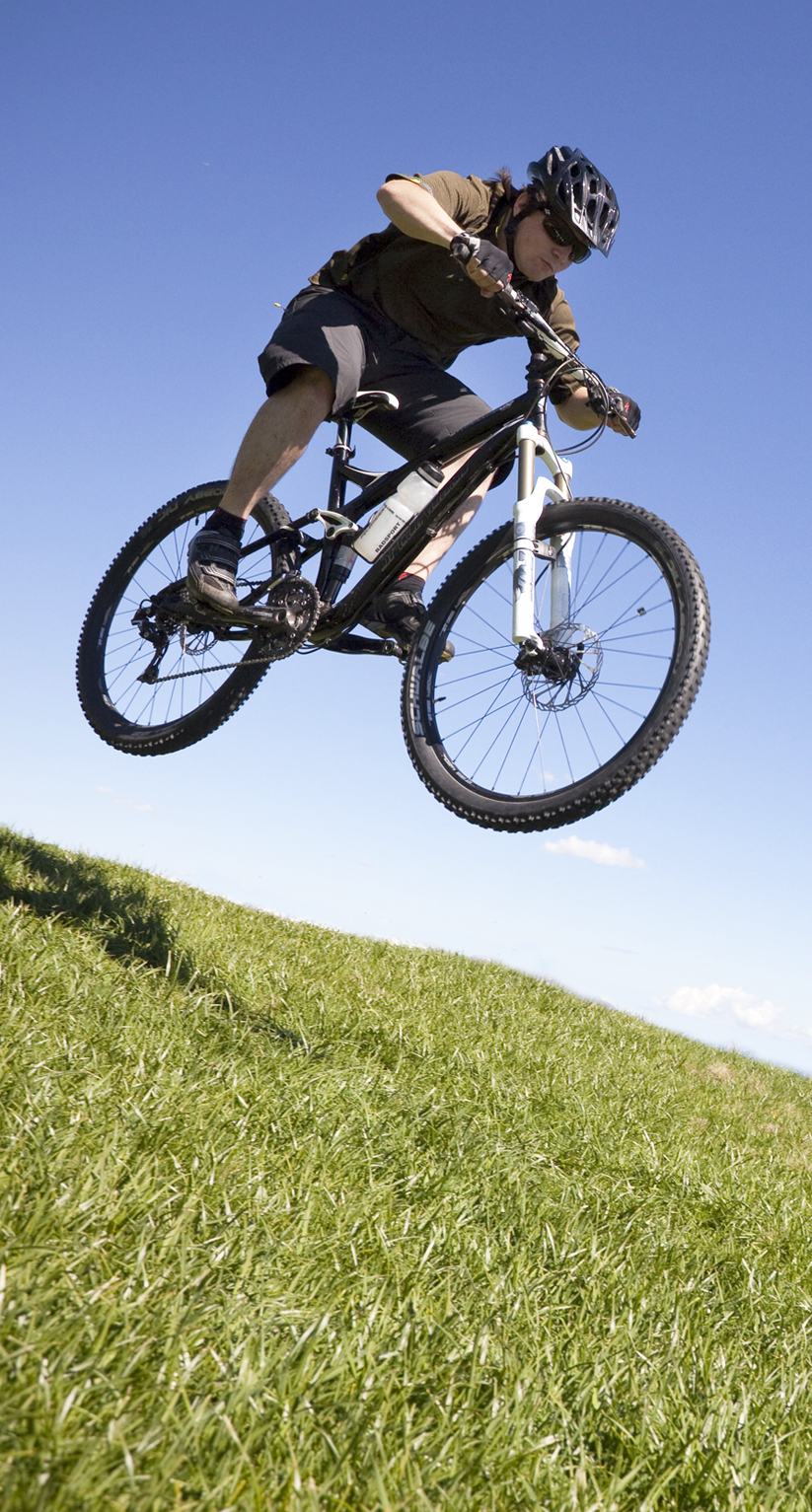 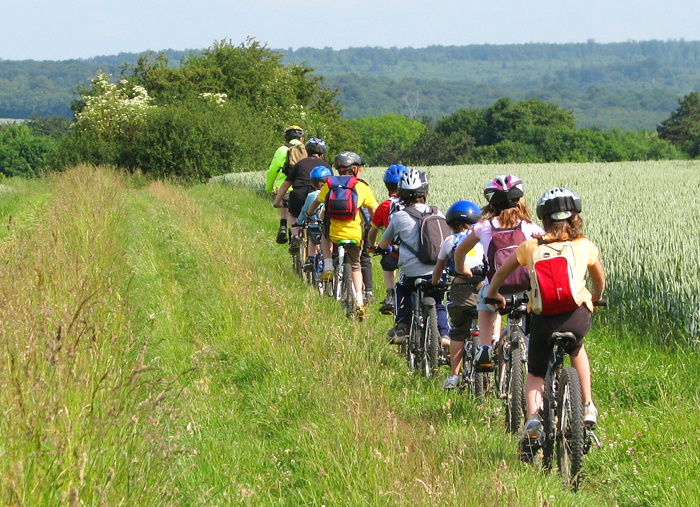 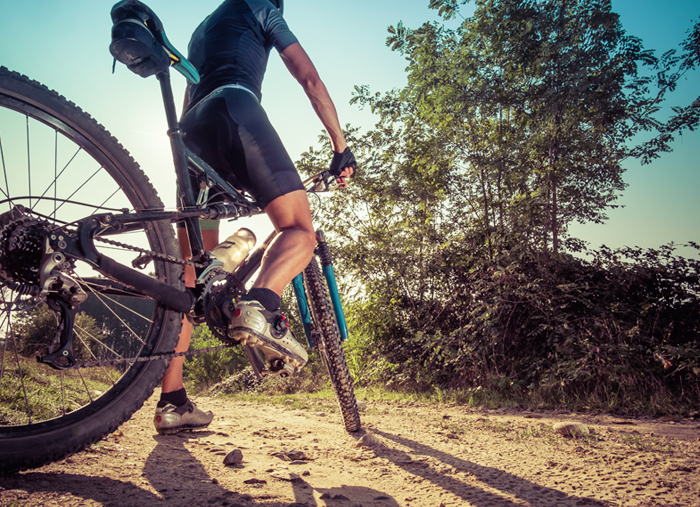 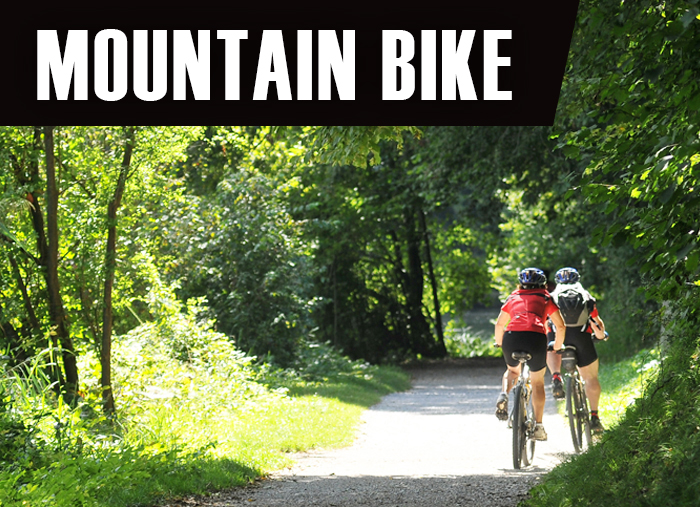 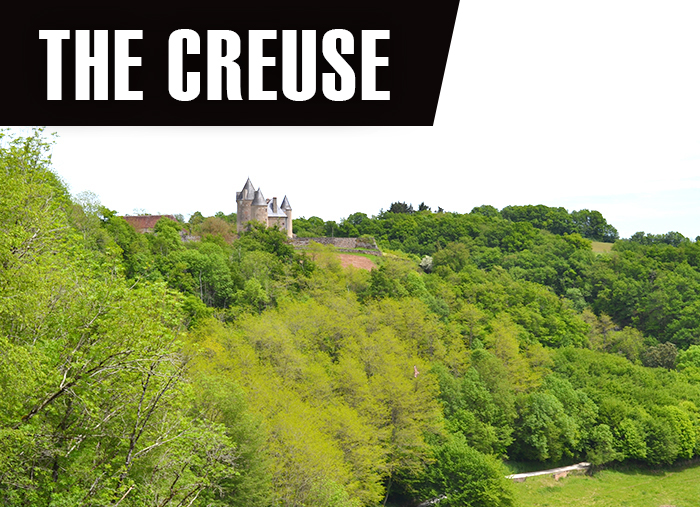 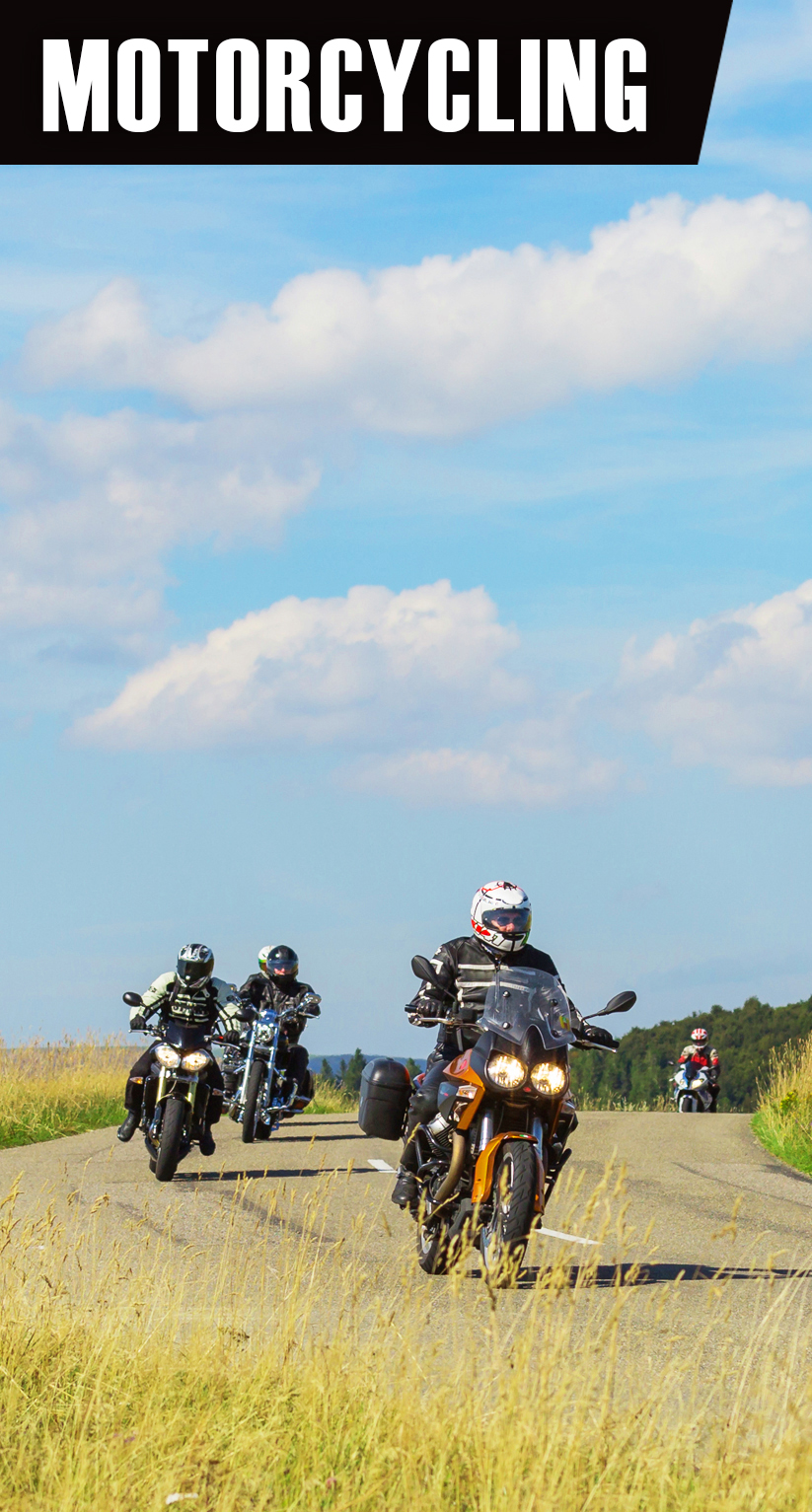 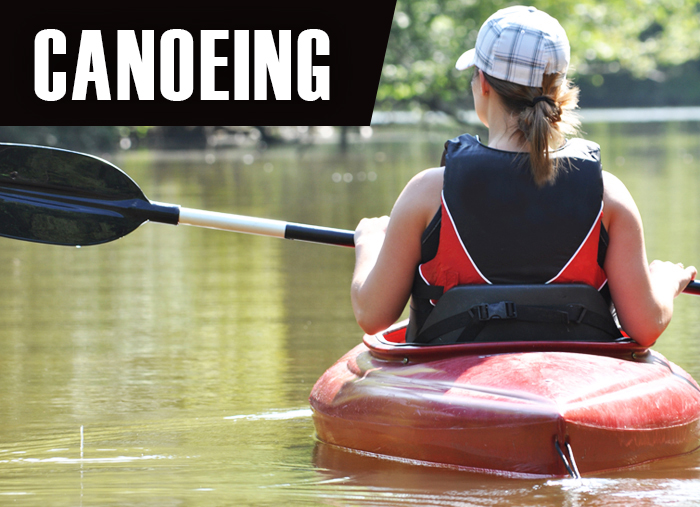 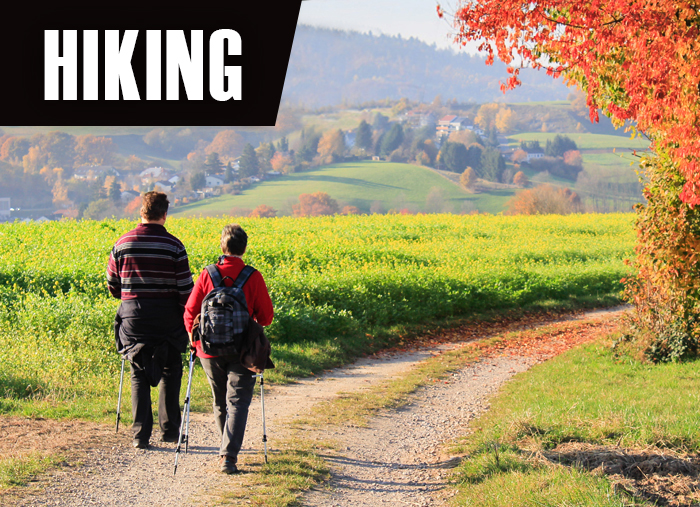 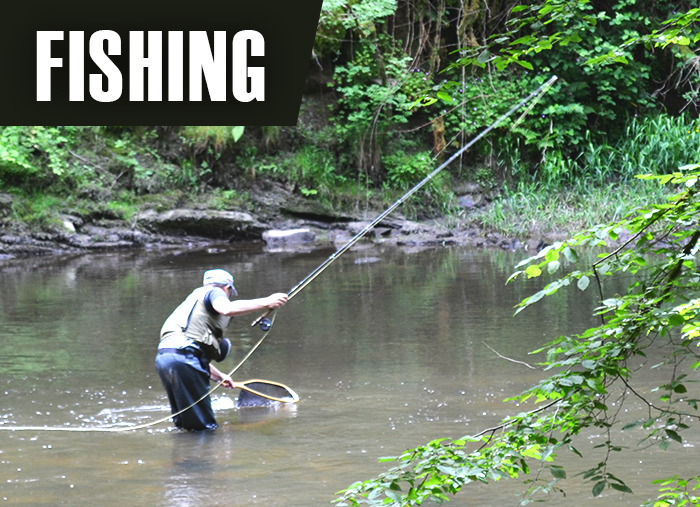